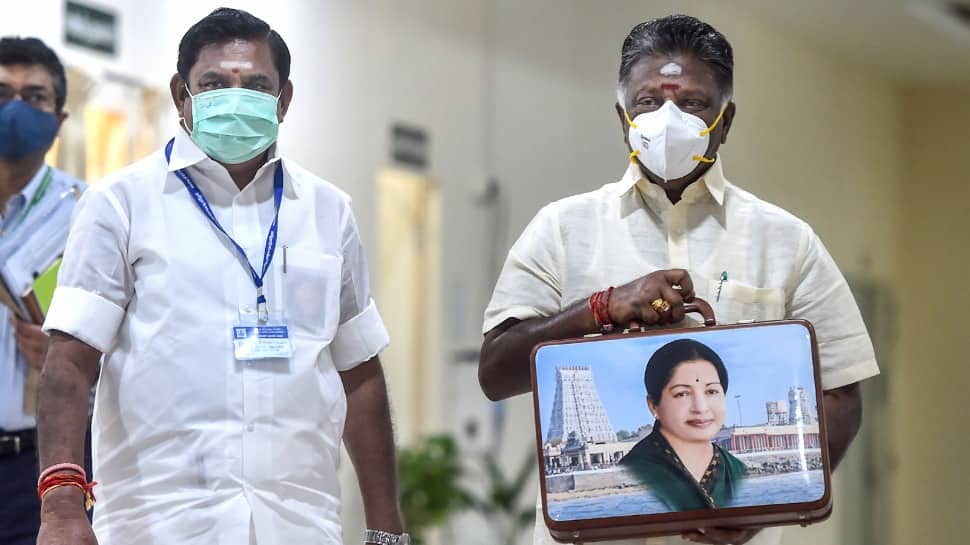 
Chennai: Ahead of the assembly elections likely in April, the AIADMK government in Tamil Nadu on Tuesday presented an interim budget for 2021-22 with the COVID-19 pandemic contributing to a 17.64 per cent fall in revenue and a widening of fiscal deficit.

The budget, presented amid a boycott by DMK and its allies, projected a positive growth rate of 2.02 per cent in 2020-21 as it expressed hopes of the economy rebounding due to various sustainable policy decisions of the government.

He also urged the Centre not to utilise the 15th Finance Commission recommended grants to substitute their share of funding for the central sector and centrally-sponsored schemes.

“I reiterate my call to the Government of India to merge cesses and surcharges with the basic rate of tax so that the states receive their legitimate share of the revenue.”

While the main opposition DMK and its allies, including the Congress and the Indian Union Muslim League, boycotted the budget presentation by staging a walkout, leader of the opposition M K Stalin, in a statement, condemned the government for Rs ‘5.70’ lakh crore debt.

As Panneerselvam started his budget speech, DMK deputy leader Duraimurugan urged Speaker P Dhanapal to allow him to express a ‘view,’ which was disallowed.

While there was a din for a while, the opposition members eventually staged a walkout, boycotting the presentation of the interim budget, the last by the present AIADMK government before the polls.

Stalin, who did not participate in the House proceedings, assured ‘growth’ for the state after assuming power by winning the coming polls.

Also, the fiscal deficit in the revised estimates (2020-21) is set to widen to Rs 96,889.97 crore, 4.99 per cent of the Gross State Domestic Product, Panneerselvam said adding yet it was within the limits of the 15th Finance Commission.

The revenue expenditure has been projected at an aggregate level of Rs 2,60,409.26 crore.

Noting that the budget carried the ‘imprint’ of the unprecedented challenges posed by the pandemic, the Deputy CM said Tamil Nadu was being hailed as a model state in tackling COVID-19.

On the whole, the government incurred an expenditure of Rs 13,352.85 crore on the pandemic response, he said.

In sync with the recommendation of a high-level panel, additional sanctions were granted -towards more capital expenditure including irrigation, housing and highways- to the tune of Rs 20,013 crore.

As against Rs 37,734.42 crore in the revised estimates for 2020-21 towards capital expenditure, Rs 43,170.61 crore has been provided in the budget estimates for 2021-22 for furthering economic development, Panneerselvam said.

Due to the pandemic, the State’s Own Tax Revenue (STOR) collapsed in the first four months of the current financial year and the collection of state GST and Value Added Tax started to pick up from August last year.

The collection of stamp duty and the registration fee has also revived but motor vehicle tax collection is yet to fully recover.

In view of the pandemic, there was a sharp drop in revenue, “but the expenditure levels had to be enhanced to protect people’s welfare,” he said.

Hence, “it is completely unavoidable that the government had to resort to borrowings resulting in a higher fiscal deficit,” he noted.

The government made allocations to other departments, including a hefty subsidy of Rs 8,834.68 crore, for the state-run electricity generation and distribution entity, Tamil Nadu Generation and Distribution Corporation.