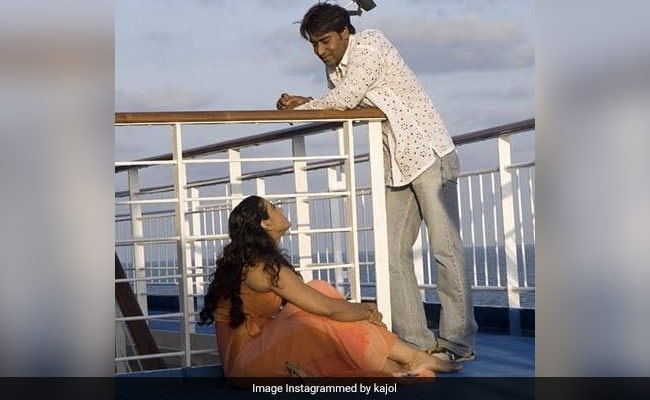 Kajol never has a dull moment with husband, actor Ajay Devgn, around. The couple are now married for 22 years and to celebrate their anniversary on Wednesday, Kajol picked a beautiful throwback picture of herself and her husband and shared it on social media with a very special caption that will melt your heart. The old picture shows Kajol, dressed in an orange outfit, and Ajay Devgn having a mushy moment on what appears to be a cruise. They can be seen looking adorably at each other. She borrowed an anonymous quote for the caption and wrote: “‘And you sir, you’re very attractive. Therefore, I will stare at you! – Anonymous and Me. #22years #stillgoing #grateful #laughingalways.”

Earlier in the day, Ajay Devgn shared this post to mark their anniversary:

Kajol and Ajay Devgn first met on the sets of 1995 film Hulchul and after some time, starting dating each other. On this day in 1999, Ajay Devgn married Kajol as per traditional Punjabi and Maharashtrian rituals.

After Hulchul, Kajol and Ajay went on to feature together in Gundaraj, Ishq, Dil Kya Kare, Raju Chacha and Pyaar Toh Hona Hi Tha to name a few. The couple were last seen together in Tanhaji: The Unsung Warrior.

The couple are parents to a daughter named Nysa and son Yug.